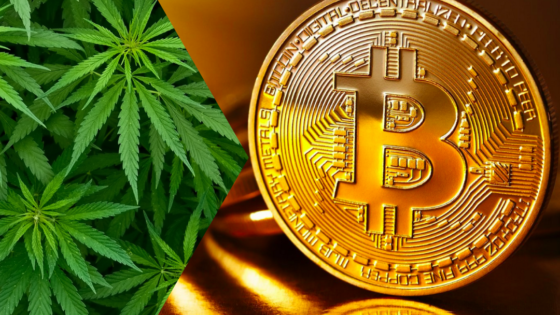 There’s a lot of talk about both. Sometimes in harmony. Sometimes as an either/or.

This is more about the latter.

The crew at Green Entrepreneur have a good run down worth a look. Here’s some choice bits:

“A few keys set cannabis apart from cryptocurrency. First, almost immediately we’ve seen established companies enter the marijuana space. 2018 saw Constellation Brands (owner of Molson Coors) partnering with Canopy Growth, and Altria (one of the world’s largest tobacco and cigarette producers and marketers) with Cronos Group. These nods to the cannabis industry from prominent, legitimate companies caused stocks to soar across the board, with the highest jumps going to Canopy and Cronos.”

In the case of cryptocurrency, it’s been a slow process for industry leaders to get on board. Just recently, in February 2019, JP Morgan announced that they would roll out the first U.S. bank-backed cryptocurrency, marking the first time a major company stepped into the space.

Secondly, the cannabis industry has defined products with defined benefits. GW Pharmaceuticals, a U.K.-based pharmaceutical company, produces a number of CBD-based medications, the most famous of which is likely Epidiolex, currently the only cannabis-based medication that can be distributed through standard U.S. channels. Beside the medical benefits, there are also potential markets for cannabis beverages, different concentrates, and a variety of other products.”

Ultimately given the differences in the two products alone, let alone the demonstrable impact on society both as a tool for wellness, social change, economic growth, and overall consumer spending response – cannabis offers a more sustainable investment option. Stocks, as per the article, may not see the same spike that Bitcoin saw in 2017, but “in the long term, especially as legalization spreads, cannabis may prove itself as a smarter five-, 10-, even 20-year investment.”

PRIVATE CAPITAL IS THE WAY

Deangelo has noted the market awakening for cannabis really started in 2012, when Colorado and Washington state both legalized adult-use cannabis, which triggered a lot of interest and action small-dollar, high-risk investing largely through venture capital investors. Between 2008 and 2018, VCs made $2 billion in investments into cannabis companies, according to data in the MGO & ELLO Cannabis Private Investment Review.

Private capital placement is where Deangelo has forecast the big opportunity exists for the road ahead for cannabis investing. Speaking to Green Entrepreneur in August, Deangelo said:

The most successful PE funds are focused on just one sector or even a subsector where they can apply their deep knowledge for outsized investment returns. PE investors, like many VC investors, maybe less well-versed in the dynamics of cannabis, but have the expertise to see how cannabis can create value in a market segment. Many times, PE investors apply more in-depth strategies beyond top-line growth prospects when evaluating their investments.”

With private investment in cannabis on the rise, indicating investor expectations about the road to total legality is creeping closer by the day, as well as the mounting data building as legal states shed a light on the impacts of cannabis legalization, there is a palpable groundswell of interest from private investor capital that could propel cannabis not only into the next growth phase, but become a means for real economic change across the world.

INTERESTED IN LEARNING ABOUT CANNAPRENEUR PARTNERS CURRENT FUNDRAISE OPEN TO INVESTORS? PLACING CAPITAL IN CANNABIS? HOW WE ARE EMBOLDENING CANNABIS ENTREPRENEURS?